A lot of us ADHD women have spent a lifetime trying to learn to keep our mouths – and the crazy things that sometimes come out of them- shut. We have impulsivity and the tendency to be more social than the average bear. If we are impulsive and emotionally charged, we may say the wrong thing and put our jobs and relationships at stake. There is much more to consider than whether or not it will feel good to get someone told off finally.

“You talk too much, you never ever shut up,” goes a popular rhyme. I remember repeating it as a child. Back then, I was bright, friendly and engaging. A “Chatty Patty,” you might say. Teachers would frequently lament my need to socialize on my report cards, despite my good grades which meant trouble for me at home. Add to this my sometimes poor performance and you have the ultimate set up: parents and teachers working relentlessly to get me to shut up!

The unintended side affect was that I began to think no one cared about what I thought. Along with this, the social awkwardness of a little girl with ADHD can lead a young girl to feel no one, not even the few friends she has, wants to hear what she has to say. These girls go quiet. The less I was heard, the more I retreated into the recesses of my thoughts. It made me a better writer. I can’t deny the fact that I struggle to communicate emotionally charged topics to people. My immediate thought is that they just don’t want to hear it.

The never ending droning of society tells us a woman should be sweet, demure, quiet. She should be timely, organized and prepared, regardless of the challenges she faces. Women commonly find themselves being ridiculed for the things they say, especially when it is something “unladylike.” Of course; why would any woman want to talk about Sex, Politics, Religion, Science, Technology, Careers or Sexism? When we do we are told Be quiet. Be sweet. Be careful. This comes at a cost. Could this stifling of women not be contributing to this anxiety and depression we see? Many of us struggle with every word that comes out of our mouth. According to the anxiety and depression association (ADA), women are twice as likely as men to end up with an anxiety disorder.

What DO we do?

Girls, we have an obligation to speak up for ourselves. Don’t let anyone’s opinions of you, your past or even your present conditions stop you from being who you are. That’s the kind of chatter we just don’t need.

Encourage the women in your life to speak. Listen. For many women with ADHD it is a rare thing to be listened to and not dismissed. That is a serious gift you are offering them. The bonus? You may find yourself really enjoying what they have to say.

Click play above to listen to “Chatty Woman,” a poem by René Brooks dedicated to her fellow chatty ADHD sisters. 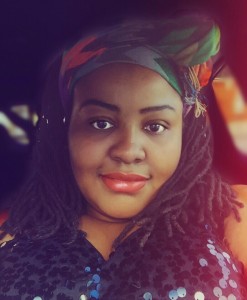 René Brooks was born a stereotypical daydreamy, talkative ADHD girl; she was officially diagnosed with ADHD at age seven and age eleven, but never received treatment until she reached twenty five. When treatment produced such positive results for her, she began blogging at Black Girl, Lost Keys in the hopes that no young girl would struggle with the side effects of a late diagnosis again. She lives in Harrisburg with her two children and their Jack Russell terriers. Learn more about René’s ADHD experience by reading her interview with us here.